Inflammatory bowel disease (IBD) is used to describe two chronic disorders Ulcerative colitis and Crohn’s disease, both cause inflammation of the small and/or the large bowel. Both conditions can also affect parts of the body outside the bowel and may be associated with poor general health.

The causes of IBD are not yet understood. While there has been a lot of research done, as yet there is no known cure for Crohn’s Disease, and the only way to cure Colitis presently is the surgical removal of the entire colon.

IBD can start at any age but commonly occurs in those aged between 15 and 30 years. Each year more and more young people are being diagnosed. 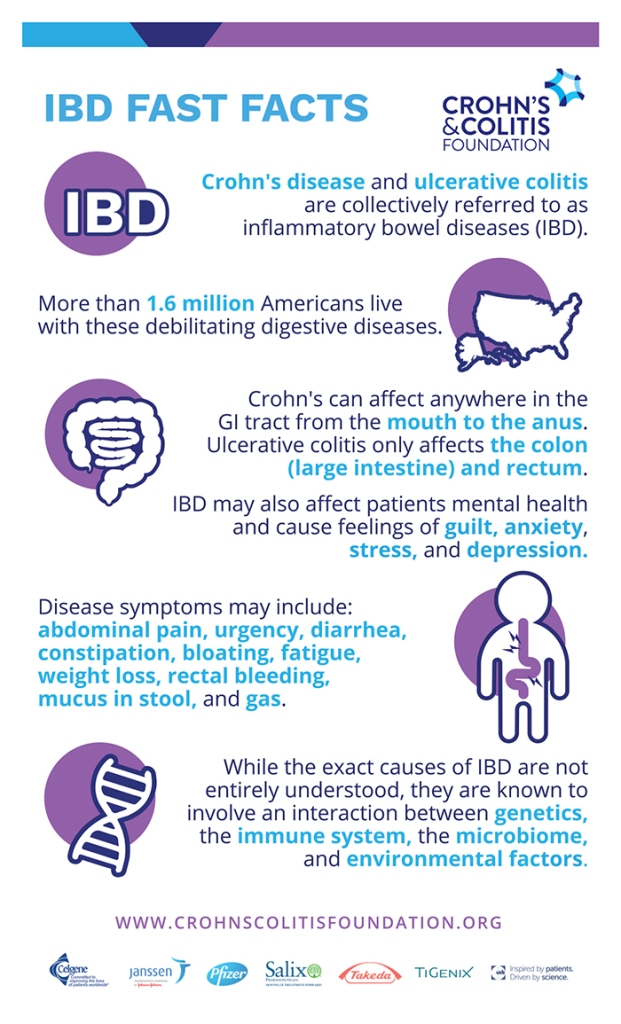 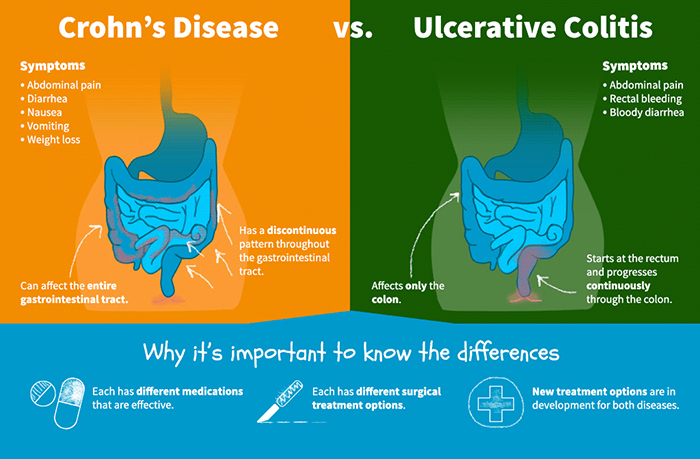 Ulcerative colitis is inflammation of the mucous membrane or superficial lining of the large bowel (the colon). Common symptoms are: diarrhea, rectal bleeding, passing mucus, abdominal pain and discomfort. There may also be fever, fatigue, lethargy, loss of appetite and, less commonly, weight loss. Symptoms and their severity depend on the length of bowel involved and the degree of
inflammation.

Crohn’s disease is inflammation of the full thickness of the intestine rather than just the superficial lining. Crohn’s disease may affect any part of the gastrointestinal tract from the mouth to the anus. Common symptoms include: abdominal pain, diarrhea, fever, malaise, nausea and vomiting, loss of appetite, weight loss and poor growth in children. In a healthy body, the immune system creates an infection-fighting protein called tumor necrosis factor. When Crohn’s disease is present, TNF is produced in excess as the immune system mistakenly identifies healthy bacteria as a foreign presence. This causes the body to launch an attack and begin fighting the excess TNF, which leads to more inflammation, which results in more TNF.

IBD does not necessarily get worse over time. Most people have symptoms intermittently. They have relapses in which their IBD ‘flares up’, and remissions with complete freedom from symptoms.

IBD is not IBS. IBS is irritable bowel syndrome. It’s not an inflammatory disease.

Treatments include a range of drugs which treat inflammation. Sometimes surgery is also required when these treatments are proving ineffective. For Colitis patients surgery can involve removing the whole or part of the colon which may require a stoma and a colostomy bag. For those with Crohn’s disease surgery may be required for acute complications and when medical therapy fails to control symptoms. However, because Crohn’s disease tends to recur, as little bowel as possible is removed.

If left untreated, Crohn’s spreads throughout the intestinal tract, causing more severe symptoms and a bleaker prognosis. The disease itself is not classified as a terminal illness, but the complications that arise from it can sometimes be life-threatening. The two most common surgeries for Crohn’s disease are bowel resection surgery, which involves removal of the deteriorated portion of intestine, and fistula repair surgery.

Medications cannot cure IBD, but for many people, they can treat symptoms or help induce a period of remission. Finding a cure for IBD may start with discovering the cause of Crohn’s disease and ulcerative colitis. IBD is an idiopathic disease, or a disease with unknown cause.

Information regarding dietary treatments for IBD is often confusing. Many people receive information telling them to avoid entire food groups or specific foods. However, there is no need to avoid foods unless they worsen your symptoms. It is best to restrict as few foods as possible to increase the chances that you are getting a balanced, nutritious diet. This is important for maintaining the function of your digestive tract and your overall health.