Turmeric is native to India and Southeast Asia. In India, turmeric has been used in Ayurvedic medicines due to its therapeutic properties, as a disinfectant and treatment for laryngitis, bronchitis, and diabetes. Turmeric is derived from the rhizomes (underground stems) of the plant Curcuma longa, a member of the ginger family.

Curcumin is the most active constituent of turmeric, making up between 2-6% of this spice. It has powerful antioxidant and anti-inflammatory properties. 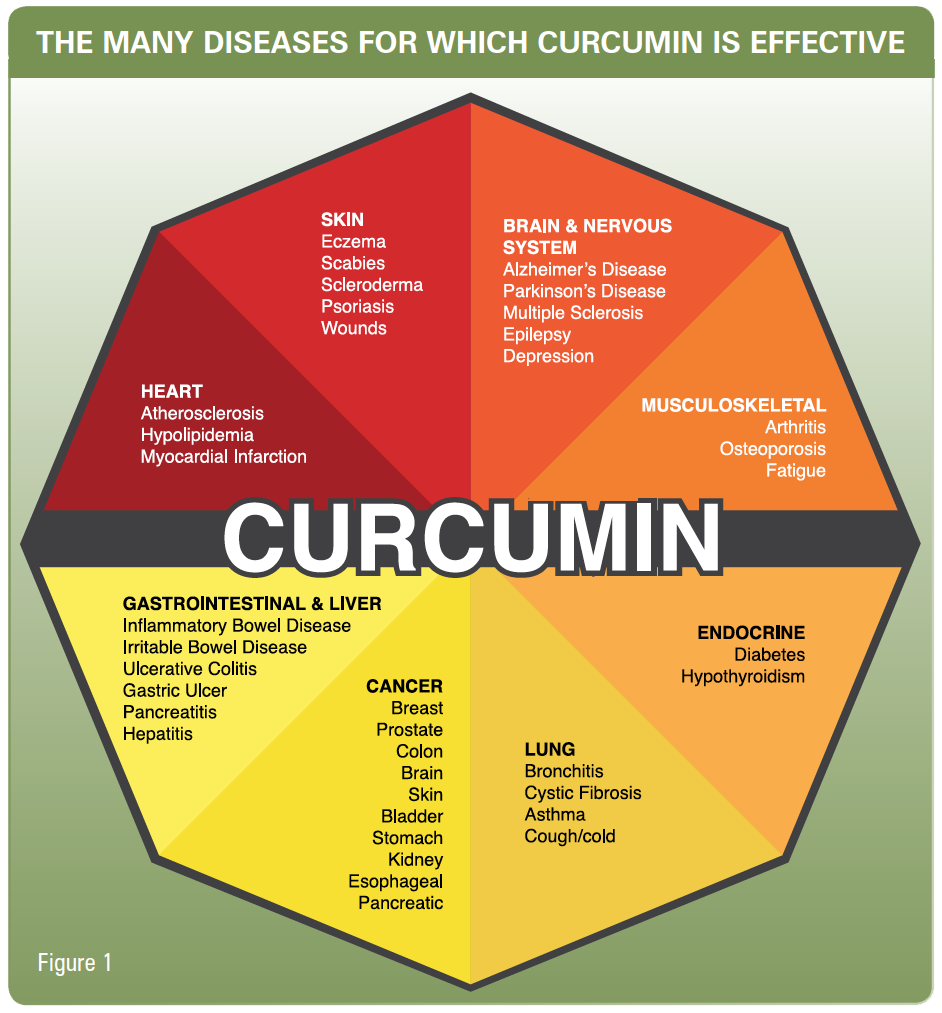 The major constituents of turmeric includes:

Turmeric is used for inflammatory disorders, including arthritis, tendonitis, and autoimmune conditions. Take 400-600mg of turmeric extract 3 times per day or as directed on the product label. Look for products standardized for 95% curcuminoids. Neither curcumin nor turmeric taken orally is well absorbed unless taken with black pepper or piperine. When shopping for supplements, make sure that the one you choose contains black pepper extract or piperine. Be patient when taking turmeric supplements, the full benefits may not be apparent for eight weeks.

Some health benefits of turmeric:

In 2009, a study was published in the Journal of Alternative and Complimentary Medicine, which compared the pain relieving effects of curcumin (the active ingredient in turmeric) and ibuprofen. It was found that the curcumin provided equally effective or better results as the ibuprofen. In 2006, a study showed turmeric was more effective at preventing joint inflammation and reducing joint inflammation than NSAIDS.

Due to its high anti-inflammatory properties, turmeric is highly effective at helping people manage rheumatoid arthritis (RA). A recent study out of Japan evaluated its relationship with interleukin (IL)-6, the inflammatory cytokine known to be involved in the RA process, and discovered that curcumin “significantly reduced” these inflammatory markers. This suggests that regular turmeric use could be a potent strategy to prevent the onset of RA from developing.  In 2010 a clinical trial found that a turmeric supplement called Meriva (standardized to 75 percent curcumin combined with phosphatidylcholine) provided long-term improvement in pain and function in 100 patients with knee OA.

Researchers from the Government Medical College (Bhavnagar, Gujarat, India) published the results of the first study this past April to evaluate curcumin’s ability to manage depression in a controlled setting. Taking 60 volunteers diagnosed with major depressive disorder (MDD) and diving the group to determine how patients treated by curcumin compared against fluoxetine (Prozac) and a combination of the two, researchers discovered that that the principal curcuminoid in turmeric is not only as effective as Prozac in managing depression but that it doesn’t carry with it all the dangerous side effects found with anti-depressive drugs. According to the paper, “This study provides first clinical evidence that curcumin may be used as an effective and safe modality for treatment in patients with MDD.”

Turmeric is shown to lower blood glucose levels and reverse insulin resistance. For instance, an article published in Biochemistry and Biophysical Research Communications shared a study out of Auburn University that discovered curcumin suppresses glucose production in the liver. Fascinatingly, researchers proved that it’s actually 400 times more potent than Metformin (a common diabetes drug) in activating AMPK and its downstream target acetyl-CoA carboxylase (ACC). Turmeric acted as an anti-diabetic and antioxidant in diabetes, especially type 1 diabetes, improved metabolic function and reduced the risk of plaque buildup in the arteries of type 2 diabetes patients.

Recent studies show turmeric is a powerful adversary to cancer. Curcumin shows a marked ability to inhibit cancer cell growth, boost antioxidant levels and the immune system, and kill cancer cells. It seems to work on improving mitochondrial function at a cellular level, and it improves metabolism. Even against drug-resistant strains of leukemia, curcumin caused cell death of cancer cells.

Turmeric has many healing properties for skin. It’s a natural anti-inflammatory so it reduces redness or other skin irritations. It’s antibacterial, so it’s great for blemishes, acne and skin balance. Turmeric is wonderful at improving the texture of the skin because it is an exfoliant but also rich in antioxidants. It’s a wonderful natural treatment inside and out!

According to a study published in the Journal Atherosclerosis on 2004, it was noted that turmeric extract can be used to help reduce the susceptibility of LDL cholesterol to oxidation, an all important step in the development of heart disease and atherosclerosis. In an experiment, controlled dosages of turmeric were fed to hypercholesterolemia rabbits and the effects on LDL oxidation analyzed. The experiment found that turmeric efficiently extracts and reduces the levels of cholesterol in the blood along with the prevalence of atherosclerosis with time.

In 2005, a study published in the Medical Science Monitor titled the International Medical Journal of Experimental and Clinical Research investigated the antioxidant and hypolipidemic benefits of curcumin in rats. The researchers induced hypercholesterolemia in the rats by feeding them with a high-cholesterol rich diet for 7 days. They then later added 0.5% curcumin to the animals’ diet. The study results showed; reduced serum total cholesterol by 21%, reduced serum LDL cholesterol by 42.5%, and increased serum HDL cholesterol by 50%. The researchers concluded that curcumin in turmeric is the phytochemical responsible for the reduction of cholesterol levels. Additionally, they noted that curcumin reduced the levels of lip by interfering with the metabolism, absorption and excretion of cholesterol rather than by antioxidant mechanisms. An earlier study published in the Journal of Nutrition in 1970 had reached similar conclusions. The researchers determined that the cholesterol-lowering effect by curcumin was as a result of increased fecal excretion of bile acids and cholesterol.

A study published in 2006 on the Journal of Nutritional Biochemistry sought to study the effects of curcumin on human liver cell line. The researchers showed that the effect of curcumin on cholesterol metabolism extends deep to the genetic levels. By treating human liver cells with curcumin, the researchers were able to show that turmeric phytochemical raised the LD-receptor mRNA seven times. This shows that curcumin raises the up-take of cholesterol by the liver and thus helps with its removal from the plasma. Therefore, by increasing the population of LDL receptors in the liver, curcumin hastens the break-down of LDL cholesterol.

Things to keep in mind

Avoid consuming turmeric if you have gallstones or bile duct dysfunction. Consult your doctor if you are pregnant or taking medication. Piperine can slow the elimination of some prescription drugs including phenytoin (Dilantin), propranolol (Inderal), and theophylline. Some evidence also suggests that curcumin can interfere with certain chemotherapy drugs used to treat breast cancer, so if you’re being treated for this disease, be sure to discuss the advisability of taking curcumin with your physician. Turmeric may interfere with anti-coagulants like aspirin, clopidogrel and warfarin. It also can affect medications such as nonsteroidal anti-inflammatory drugs (NSAIDs).