Dengue fever is a mosquito borne disease caused by dengue virus and is spread though the bite of the Aedes Mosquito. Dengue Fever and Dengue Haemorrhagic Fever (a more severe form) are the most common mosquito-borne viral diseases in the world. 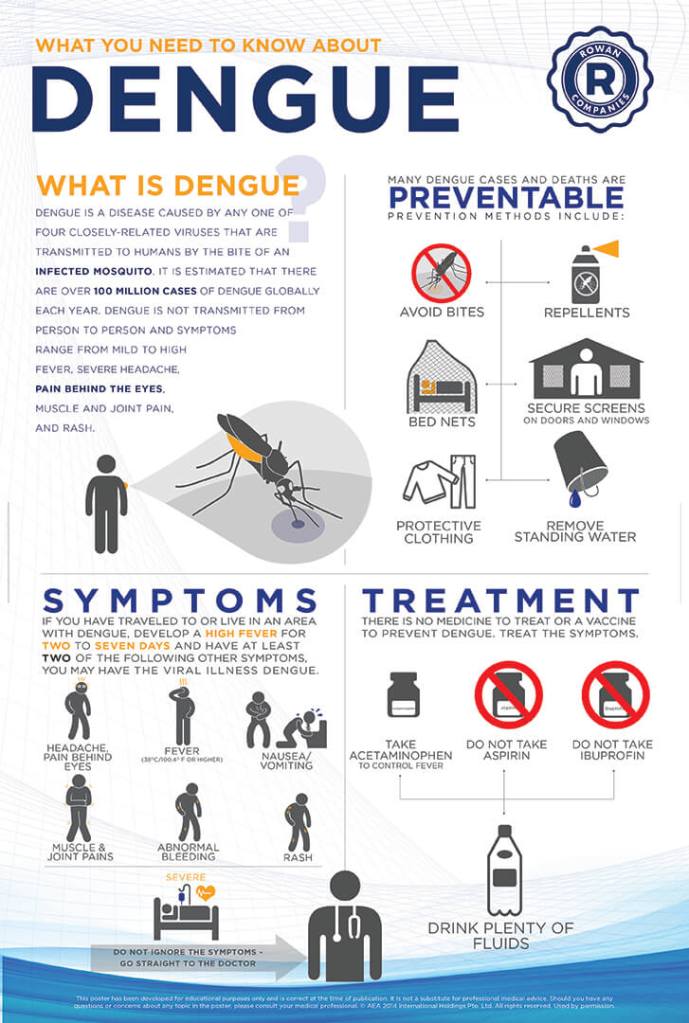 Aedes mosquitoes are identified by the black and white stripes on their body. Mosquitoes become infected when they bite infected humans, and later transmit infection to other people they bite. To prevent dengue fever, make sure precautions is taken to avoid being bitten by mosquitoes. Frequently check your house and potted plants to ensure that there is no stagnant water.

The symptoms usually develop within 4-7 days after being bitten by an infected mosquito. Symptoms of classic dengue include:

Dengue Hemorrhagic Fever is a severe form of dengue fever which can result in death and is characterized by:

Dengue Shock Syndrome is the most severe form which usually occurs in children having a re-infection and is sometimes fatal. It often presents with:

Dengue fever is diagnosed by doing two blood tests 2 to 3 weeks apart which will determine if the blood samples contain antibodies to the virus.

There is no specific treatment for dengue fever and most people recover within 2 weeks. To help with recovery, general measures include:

For severe dengue symptoms including shock and coma, hospitalization and aggressive emergency treatment with fluid and electrolyte replacement may be necessary to save lives.

Most people with dengue fever recover completely within 2 weeks. The more clinically severe dengue hemorrhagic fever and dengue shock syndromes can result in vascular (blood vessel) and liver damage, and can be life-threatening.

The best way to prevent dengue fever is by taking precautions to avoid being bitten by mosquitoes which include:

​This website does not in any way promote the use of specific nutraceuticals in the prevention of physical or mental ailments, nor does it support claims of the effectiveness of such nutraceuticals. This website was created for informational purposes only, and we encourage readers who choose to experiment with nutraceuticals to consult their doctors before doing so.
Loading Comments...
Comment
×
%d bloggers like this: